HOW TO MAKE SURE YOU’RE ON SANTA’S NICE LIST 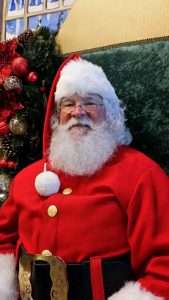 For the last seven holiday seasons, photos with Santa made up more than half of John Moore’s annual sales with RazorPix Photography.

“It’s the best part of being a photographer. Kids only get to spend a few moments with mall Santa, but our customers get to experience the magic of Santa as long as they wish. Mall Santa has nothing on us”.

As it turns out, Santa Claus saved John Moore’s life. A few years ago, John was experiencing a lingering stomach ache while doing paperwork after an evening of holiday photos. His hired Santa for that evening suggested he go to the emergency room, but it was Friday night, and John cringed at the thought of waiting around in the ER. In the end though, he couldn’t say no to Saint Nick. It turned out to be the right decision, as that night John was quickly diagnosed with appendicitis and was rushed into surgery. If he had waited any longer, this story might have had a different outcome.

That wasn’t the only hardship, though. Not long after John’s surgery, his wife passed away. She fell ill a few years prior, and since she was his business partner, they ended up scaling back their workload during this difficult time. John was faced with a difficult decision: should he continue forward with the trials of being an entrepreneur, or call it quits and find comfort working for someone else?

He decided to attend one last event this past spring – PSU Live. Being around so many other like-minded individuals inspired him to give it another try. But this time he was going to go all-in, and he subsequently rebranded his business.

Baseball season arrived, and John found himself experimenting with new workflows to make his revamped business more profitable. However, action photos were not paying the bills.

“And it was the icing on the cake. I’ve never had this many contracts in a year! I started using PhotoDay to market my services during my action events. At one tournament, I talked to 3 different league presidents and walked away with 3 contracts!”

TURN YOUR CONTACTS INTO CONTRACTS

This became an effective sales tool and strategy for John leading into fall.

“No order forms, multiple poses, photos up and ready to purchase next day, custom graphics, delivery straight to home. You can’t mix the old way and the new way. I had an advantage because I was starting from scratch – and I didn’t have to think about the old workflow, only the PhotoDay workflow and all of its advantages. It complements my existing service – I am also an action photographer. So when I implemented PhotoDay into my existing business, I sold the experience of it all. The organizations love it! I booked 5 new leagues this fall.”

John says PhotoDay has not only contributed to helping him land more contracts, but it has eliminated piles of paperwork, and has saved him about 30% in overall labor costs this fall. Instead of worrying about processing each event after it has been photographed, he can simply move onto the next one quickly and efficiently.

“Parents absolutely love the experience PhotoDay provides. I get to spend more time creating images, and my customers have a greater selection to choose from. My average order was $35 and now it’s $55. While the quantity of orders has slightly decreased as to be expected with anything new, my overall sales have increased, and my customers are satisfied.”

JOHN’S ADVICE FOR THOSE ON THE FENCE ABOUT PHOTODAY

“Patience. I expected money right away… But to really see sales it takes about 30 days. Once the revenue stream started – it was consistent. I know it’s been way more profitable – but I’m to the point now where I’ll sit down and look at everything and figure out the next steps on how I can improve for future events.”

Communication is more important now more than ever. Find that board member who is going to spend time with you and cares about picture day.

Make sure to use tags. It gives parents the best experience possible. Let them have different ways to search! Get familiar first and know the system. It will save you so much time in the long run.”