This article has been amended since its initial publish date with additional sales data.

Jay Boatwright’s distinctly artistic photography combined with his intense work ethic and love of new technology make him a true industry trailblazer. He and his wife Carinna lead a thriving volume sports studio, smaX Photography, based in Canton, Georgia. They capture up to 25,000 kids per year – covering all major sports mostly at the elementary and middle school levels. But, things didn’t always look this good…

About 11 years ago, Jay worked in insurance sales and Carinna was a waitress. Like many young couples, they were struggling to make ends meet. He knew he had to try something different.

He had one friend with a fathead printer and another who ran a big basketball league. So, he got the idea to bring it all together by selling fatheads at the games. He hired a photographer to take photos of the players (because he didn’t know anything about photography), and he sold the fatheads. “The concept worked…kinda,” he told me. 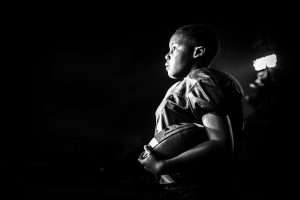 He and his small team were working hard and earning some money, but he began to realize that team photography would make for a better business in the long run. Always being around photography, he was bitten by the bug and decided he wanted to be the one taking the photos – and he wanted to learn everything he could to make them “really cool.” He started studying and trying his hand at action photography – and he eventually discovered how to make it work as a business.

He slowly phased out of action photography and into team and individuals. He knew that if his photography had a unique look that sales would follow. Carinna joined him as a partner and business manager and things started to take off. They were careful not to grow too quickly, turning away leagues that they couldn’t yet handle. A true artist, he never wanted to compromise the work.

Over the years, they’ve gotten more and more efficient. Jay loves gear and technology, always looking for ways to work smarter and faster to make the best possible photographs. Carinna handles all aspects of the business managing their client organizations and making sure that their customers are happy.

WHY HE SIGNED UP FOR PHOTODAY

“About 30% of our workflow is spent on taking the photos – the other 70% is paperwork. Our team touches each order form 3-4 times after the photos 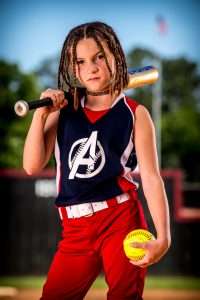 are taken. Processing checks and matching order forms with kids’ photos at high volumes can be daunting. PhotoDay essentially eliminates all of that backend work,” he shared with me.

He says he’s most excited about the cost savings from using PhotoDay. With less paperwork, he can scale his staff back and focus the team on editing photos and being creative. “I’d rather teach my staff how to use Lightroom and Photoshop than how to scan in order forms!”

He started using PhotoDay with a local fall ball baseball league that he shot in late September. He thought it would be a good test – because he could compare it to a similar job just down the street that he shot using his traditional workflow.

The results are impressive. He admits that they didn’t do the marketing exactly right which is why the order numbers probably aren’t as high. That said, the AOV more than makes up the difference.

The bottom line! “22% higher sales with 50% less effort! We’re really excited about these results. We’re in a competitive market – so combining the style of work we do with PhotoDay technology, gives us a significant advantage. Can’t wait to build our business with PhotoDay in 2019!”

In 2019, Jay shot his Hobgood League using PhotoDay. Below is a chart comparing his 2019 numbers with the same league using paper forms the previous year.

In preparation, Jay created a video to help get this league excited, and explain to parents how their picture day is changing. Then, he offered a FREE social sharing download for anyone who purchased a package within the first 48 hours of his gallery going on sale (for info on how to do this, checkout this webinar). After the third week of sales, Jay contacted PhotoDay and had them deploy a few series of custom SMS messages to opted-in parents, letting them know that there was a limited time left to purchase photos under his best available pricing.

This method of combining an exciting promotion while creating a sense of urgency during his sales period has reflected positively in his use of PhotoDay for this league!

The Boatwrights stopped by the PhotoDay office to share their story and success secrets.